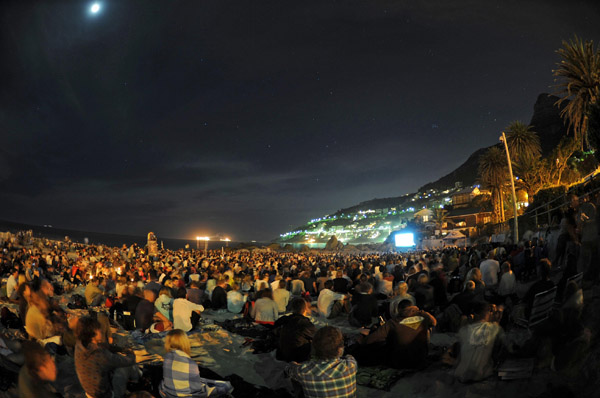 As part of my committments in directing education and awareness for the Save Our Seas Shark Centre, I assisted with the Save Our Seas Foundation sponsored Wavescape Film Festival. The events have been a fantastic success: Check this link out on Wavescape: http://www.wavescape.co.za/wavescapes-film-festival/thousands-pull-in-at-clifton.html

Over 3000 people attended the Clifton event and I managed to secure high quality exposure: SABC TV 2 and 3 at 6 pm and 7pm national news on Sunday night – the exposure was fantastic, we reached a million people or more. I also addressed the audience before the film, my angle was the unusual combination of sharks and surfers, the importance of our partnership, of them becoming ambassadors for sharks, which was very well received! After the AOCA Rethink the Shark ad is shown there is always clapping and whistling – they love it!

I also addressed another audience of 200 people on the Wednesday night Wavescape auction of sufboards, and some of Tom Peschak’s images – given the feedback an interest of people in supporting the cause I realised the power of giving a passionate talk.

The combination of sharks and surfers is unique and a topic of great interest to many – the feedback has been fantastic and the events a great success for the SOS Foundation and most of all raising awareness for our cause – RETHINKING THE SHARK!

Thanks to everyone, in particular my team, Mathew, Zaneli, Mike, Kim, and Jan who helped to make this such a great success and to the SOSF for making it possible!