I recently returned from my first break from the conservation demands this year. I had no internet connection for the majority of the trip so herewith my entries, which I will add to as I get a moment: 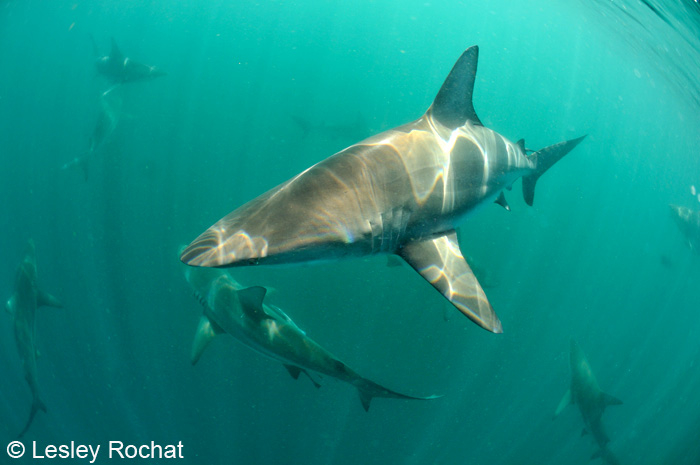 I’m a guest of Michael Aw’s on one of his trips to South Africa to dive with the blacktips and tiger sharks on the Aliwal Shoal, as well as the Sardine Run. I feel fortunate to have this opportunity to meet him as I have long since admired his work. It’s wonderful to take a much needed break, albeit very short, from the pressures of the Shark Centre and the AOCA fights back home and to meet a group of enthusiastic aficionados of underwater photography that are part of Michael’s group.

I’m on the blue sea again, and the wind in my face, the water on my skin, and sea salt on my lips tastes like home. My heart lets out a huge sigh. My new underwater housing has not arrived and bad viz puts pay to my plan to shoot some video footage. Fortunately Michael loans me his spare housing and I give it a bash for a few frames. There’s no tigers, they’ve been shy the last few days but about 30 blacktips keep us close company. I love their speed and curiosity, their bronze and beautiful streamlined bodies. They remind me of fox terriers, they are often at my heels almost nipping at them and I’m convinced it has something to do with my two tone silver and black Mares fins, though others think I’m being silly. But I did take that thought further and my new wetsuit, kindly sponsored by Elaine of Coral Wetsuits, is minus all branding expect on my chest. I’m convinced the sharks find contrast on wetsuits worth investigating and I’d rather go with my gut feeling than prove my own theory right. The plan is to dive with the sharks for a few days and then head for the sardine run. Bad weather is coming and the Ocean will decide what and when we can dive and if there will be any action this year on the run, I’m optimistic though.

Special thanks to Michael and to Walter Bernadis of African Watersports, I appreciate your kindness and support. 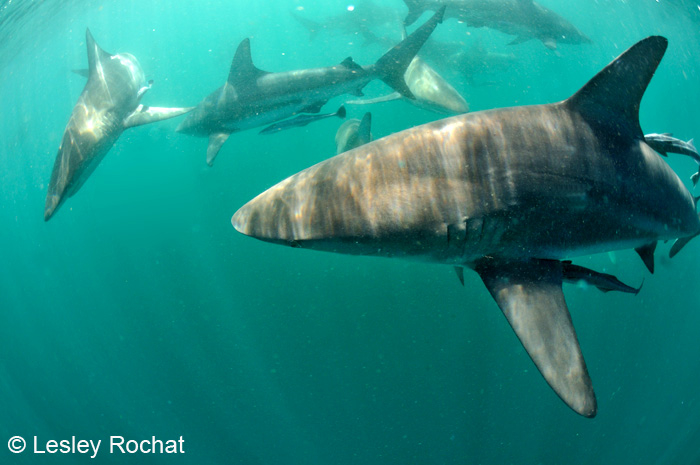 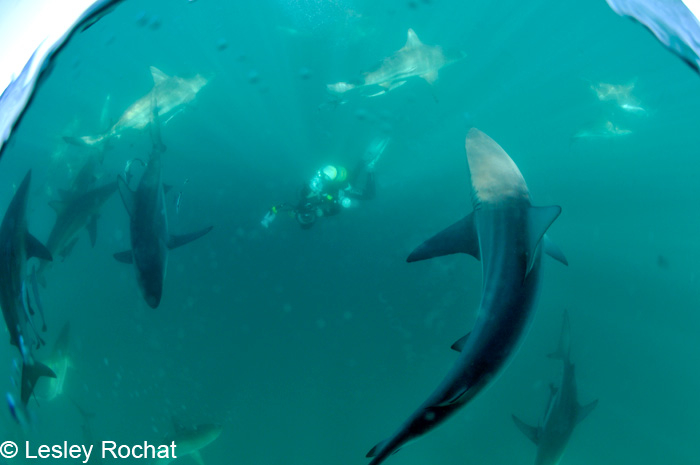 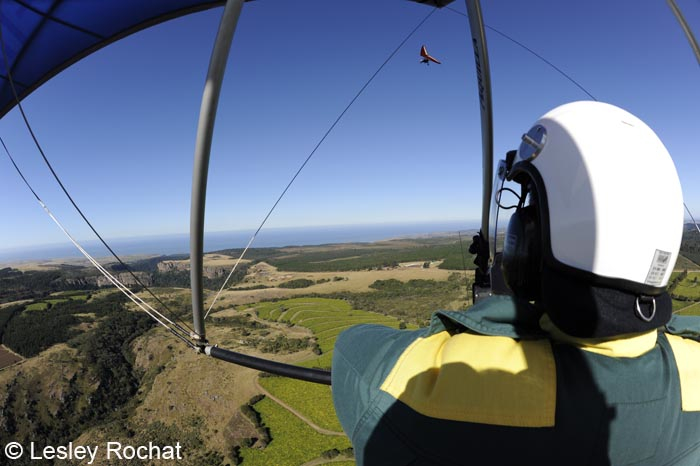 My optimism is beginning to wane. I arrived at one of the last paradises left on Earth, Mboyti in the Transkie for what’s turning out to be the illusive sardine run. We’ve been here for four days and relentless poor weather conditions have kept us land based. The spirit of the group is still full of laughter but I wonder how long that will last if the weather remains stubborn. Every morning at 6.30am the group, filled with hope and enthusiasm, gather and await the decision from Walter, to go or not to go. The ‘no go’ is weighing the disappointment heavier each day. Cameras and wetsuits have been dry too long. Watching white clouds of gannets diving into bait balls from the shore only makes us hanker more after the big blue and the action it promises, the experience of a lifetime we have all come here for, many from around the world. I watch the birds and visualize the teaming bait balls below them, how they dive into them at dangerous speeds and impact, like bullets scattering the shoals, and the bronze sharks, seals and dolphins smashing through the tight balls of frightened fish, feasting on each little sardine , down to the very last one. For some entertainment, and to smooth the edges of boredom, we took a brief microlight flight. But it hardly helped soothe the roaring anticipation I still cling to. Maybe tomorrow will be the day. My new housing finally arrives tonight; perhaps with it comes the turn of good weather… 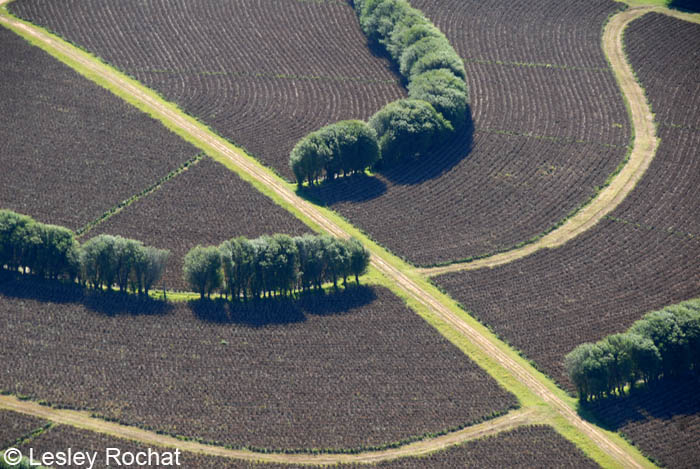 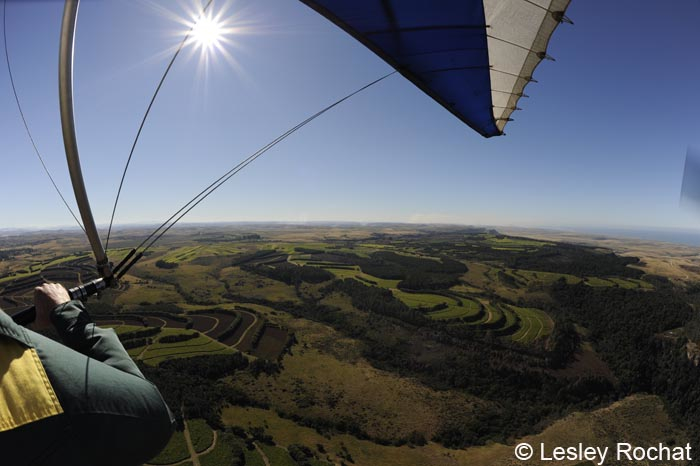 I gave up writing entries while I was on the sardine run but the summary of the rest of my time on the run is evident in the pictures and captions below. I will have to return some day for the greatest shoal on earth! 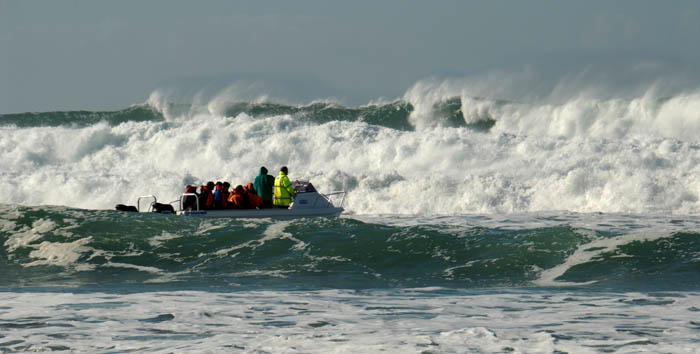 On the sixth day Walter towed the boats to a nearby bay in the hope we could launch, but the no matter how hard he tried it was impossible – the ocean was wild. Photos: Lesley Rochat

For two days out of seven the swell dropped enough for us to launch from the beach but there was simply no sardine action except loads of dolphins but no opportunity to photograph them underwater. Others before and after my stay were much luckier…next year here we come…