Lesley, the Ragged Tooth Shark, is Back!

Posted Mar 16 2009 by Lesley Rochat in Conservation, Sharks with 0 Comments 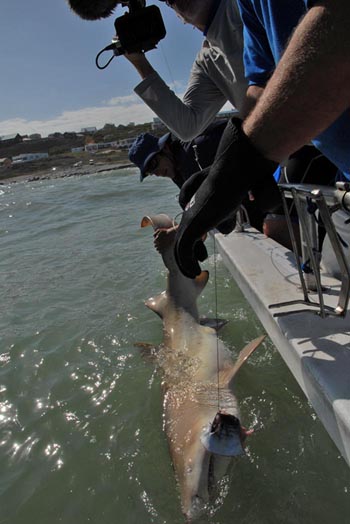 A wild shark is caught for tagging: Photo: Lesley Rochat

I am delighted that Lesley, a ragged tooth shark, named after me, who was caught on the 15 March 2006 and satellite tagged and released, was recently re-captured. She was one of many sharks tagged as part of the  M-Sea Programme, a unique shark conservation programme initiated by AfriOceans Conservation Alliance (AOCA), in collaboration with the Two Oceans Aquarium, and which was sponsored by the Save Our Seas Foundation.

Normally after the satellite tag has released and surfaced, which it is programmed to do after 4 months, providing data of the animal’s movements, there’s a good chance we will never hear from the shark again. The sharks are also wearing ultrasonic tags, but the signal of these will only be detected if the shark passes within 300m of a base station positioned on the ocean floor. But Lesley is back, she was caught by an angler in Struisbaai who removed her spaghetti tag, a small tag with a unique number, and reported the details. The last time we heard from her was when her satellite tag surfaced and provided the information that she had travelled 970km in 120 days from her date of capture. Since then Lesley had grown just over 17cm and gained about 35 kg. Lesley was caught the same day Dee was released from the Two Oceans Aquarium after 14 years in captivity. Dee’s tag showed that she had travelled 700km in 118 days.

We are very grateful to the angler for reporting the information but unfortunately he removed her spaghetti tag, which means the chance to identify her, if she is ever caught again, is lost. We therefore request that should an angler catch an animal with a tag, if they do not have a tag to replace it, to rather record the number and leave the tag on the shark.