In 2007 AOCA was looking for a new campaign. I therefore worked with the creative team of Saatchi & Saatchi with the aim of expanding on the Rethink the Shark campaign they had created for AOCA and which I used for the M-Sea Programme (the releasing of Maxine and other sharks), an AfriOceans initiative, in partnership with the Two Oceans Aquarium, and sponsored by SOS Foundation till 2007. After a few creative brainstorming sessions Rethink the Predator was born. Like the rethink the shark campaign, this campaign has a number of different elements and this is just one of them.

I love the information card and of course the decal which turns the mirror on us. People curiously look at the decal which is back to front, wondering why it has been stuck on the wrong way until  the ‘ah, ha!’ moment dawns, a great awareness moment. The SOSF are trying to get aquariums to support the campaign by displaying it on their predator tanks. They also submitted it into the Jackson Hole Film Festival in the 360 campaign section, combined with 95% of other rethink elements I was responsible for creating, such as the shark protest, shark paper peak caps, SharkWise signage, plus loads more of my work, and it won the 360 campaign Award. Unfortunately, as with the Panda Award which Rethink the shark won last year, I was not with Chris Clarke, executive director of SOS, at yet another prestigious award ceremony to collect the award, which would have been really great, nor was AfriOceans or I credited. But it is extra great to know that our work is receiving the recognition it has.

I’m pleased to see that a number of people have put these rethink the predator images on their blogs, and are helping to get the message out there. And as always I thank Saatchi & Saatchi for always coming up with something unique and powerful and being masters at interpreting my briefs with a good twist of their own. 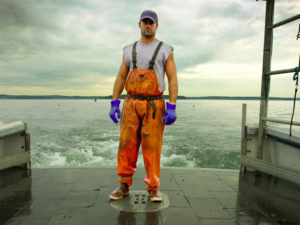 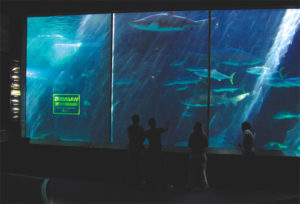 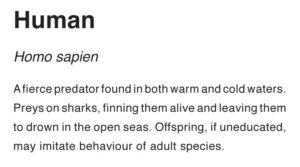