Posted Oct 7 2009 by Lesley Rochat in AfriOceans, Conservation with 2 Comments 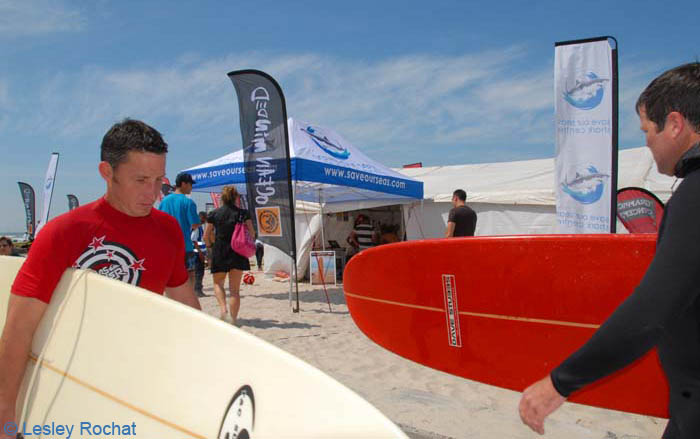 The headline of the paper read, “Organized chaos as Muizenburg attempts to get most surfers riding the same wave.” For me on my board behind the backline chaos was the operative word. Michael Carnegie, one of the SOS Shark Centre educators, and I were amongst about 400 surfers trying to line up to catch the wave of waves in an attempt to break the world record held by Brazil of 100 surfers. 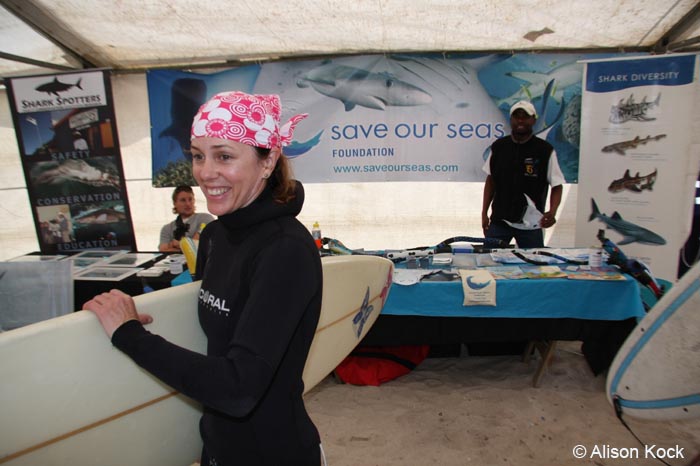 We were tightly packed like sardines in a can and just turning my rather long board nearly resulted in me decapitating someone. The water was green, zero visibility, and the black flag waved us on from the shore, indicating that the shark spotters could not see if a white shark decided to join the event. But apart from the fact that we were practicing safety in numbers, an unexpected encounter with a white shark was furthest from my mind. What was of great concern was how I was going to come away from this event without someone’s surfboard seriously injuring me when the inevitable collisions accord. The sea rescue vessel hovering around and the announcement that other First Aid teams were on standby only made me more anxious. But try and help break the world record I patriotically supported since we set the first record in 2006. More than this, however, I supported this event because it aims at raising awareness about looming climate change and each of our responsibility to help save our planet. As conservationists we need to walk our talk and so I forfeited the opportunity to photograph this amazing event and rather don my wetsuit and take the risks associated. 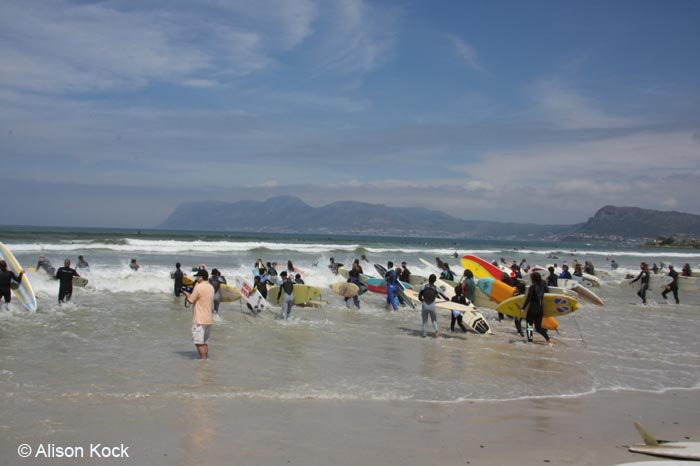 After one of the officials on a jetski gave the confusing signal to go or not to go while shouting “This one, this one!!”, and not really knowing which one he meant, the one right behind or the one behind that, I forgot everything, focused on the mission, and paddled like a white shark was on my tail. I got to my feet and all too quickly surfed over another surfer, who miraculously came away unscathed, then went flying into yet another surfer, resulting in a rather large pile-up. My other attempts went more smoothly but I confess the winning wave was one less because I was nursing my shin which had taken a sore knock from someone else’s flying surf board. Back on shore the crowd cheered as 103 surfers glided toward them – we had done it!  The Save Our Seas Shark Centre, an AfriOceans project, funded by SOSF, supported the day with our stand which Michael and Mathew manned, and Alison Kock, our field scientist and white shark researcher, took some great pix. Thanks to everyone who participated, organized and supported – it was a great day, and meaningful event indeed!