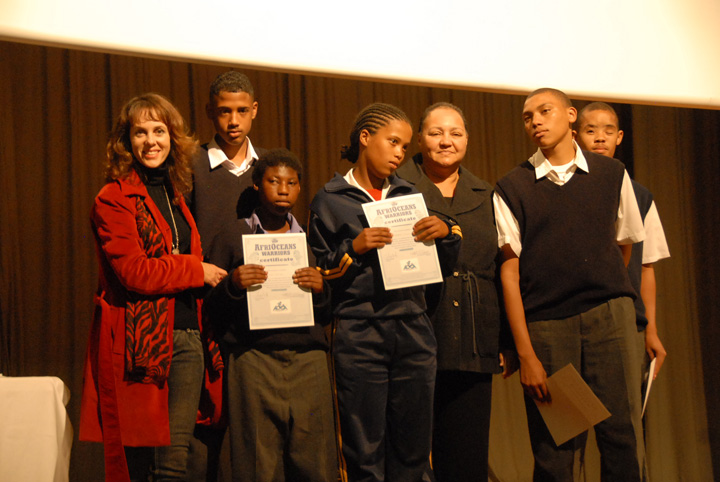 Me with Mrs Williams and learners from Ocean View Special Needs School after receiving their certificates of participation of the AfriOceans Warriors Global Awareness Hike.

Mrs Lallette Mc Gillewie, and learners originally from Muizenburg Junior School proudly showing their certificates of participation.The hike was a very significant event in the history of marine conservation and environmental education in South Africa: 430 school learners from 13 schools hiked 8 kilometres along a stretch of our coast to hand deliver a message to select dignitaries. As ocean ambassadors, they raised awareness and sent an important message to the leaders of our country, and the world, about the plight of our oceans. (Watch video)

In order to acknowledge all participants of the hike, the AfriOceans Warriors Celebration was organised during which local music, fashion and the marine environment were showcased. The evening kicked off with Donovan Copley, leader of South Africa’s top band, Hot Water, accompanying learners modelling the new AfriOceans Warriors T-shirt range, sporting slogans like ‘Hot Chicks for a Cool Planet’ and ‘Think Global, Act Local’.

Dr Bruce Copley leading the Rainbow Warriors Vuvuzela EnsembleAnother highlight of the evening was the first performance of the AfriOceans Warriors Rainbow Vuvuzela ensemble, drawn from Muizenberg High school learners and led by Dr. Bruce Copley. This dynamic group aims to take the AfriOceans Warriors message to the world by performing at various fan-parks related to the FIFA World Cup.

Mr Dave Shaw, Headmaster of Muizenberg High School with Lesley Rochat.Principal of Muizenberg High, Dave Shaw, told the packed hall that the AfriOceans Warriors project had made a significant difference to his school and it was changing the lives of many learners. He said: “I am excited about the projects approach of moving from awareness to action, which will provide an opportunity for the youth to take decisive action to protect our marine environment before it is too late!”

One of the founders of this innovative environmental education initiative, Deputy Principal of Muizenberg High, Leonie Jacobson, said that the AfriOceans Warriors represented the successful collaboration between education and communities.

Mr Juan Benjamin receiving a gift, a large photo of the SOS symbol the learners made.Guest speaker, Juan Benjamin, Chief Education Specialist with the Western Cape Education Department, endorsed the AfriOceans Warriors programme, and stressed the importance of taking environmental action. He said: “We actually have to be activists; we have to go out there and show our fellow human beings that we can turn things around; that we can make a difference and improve our lives through practices that give back and not just take from the environment.”

Founder of the AfriOceans Conservation Alliance (AOCA), Lesley Rochat said that a recent study has found that the youth are feeling increasingly overwhelmed by the impending environmental crises reported daily and they are unsure about what they can do about it. She said: “This is where the AfriOceans Warriors Programme steps in. Its approach is unique and fresh, it aims to empower the youth to become a member warrior of a unique African tribe. Armed with the correct knowledge and tools these young AfriOceans Warriors will take positive action in order to raise awareness and help save our oceans.”

Learners from Muizenberg High School with the certificates against the backdrop of the wall in the hall decorated by the students.She explained that this year represented an exploratory phase for the Programme, with Muizenberg High school as the pilot project. Already 80 young learners from the school had joined the first AfriOceans Warriors Tribe. Over the next three years, and dependent on funding, the programme aims to reach 170 schools along the South African coastline, targeting 170 000 school learners.

Head of Education of AOCA, Terry Corr, said it had been a dream realised to be part of creating this new vision for Environmental Education in South Africa, which took bold new steps in moving from Awareness to Action. He said that the AfriOceans Warriors Facebook group, set up a few weeks ago had just passed the 1000 member mark and he encouraged all those that wanted to be part of the project to join the group.

AOCA invites schools to contact us should they be interested in adopting the Programme at their school in 2011 on info@aoca.org.za or AOCA offices at 021 782 7590. Visit our website: www.aoca.org.za 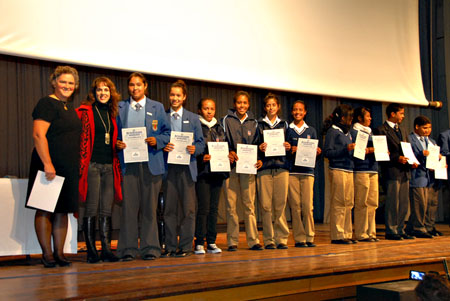 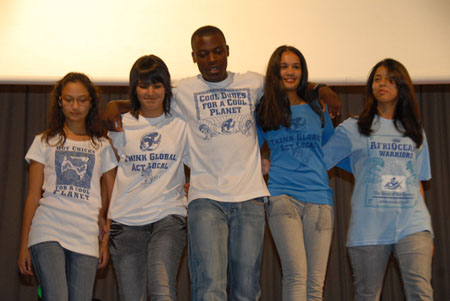 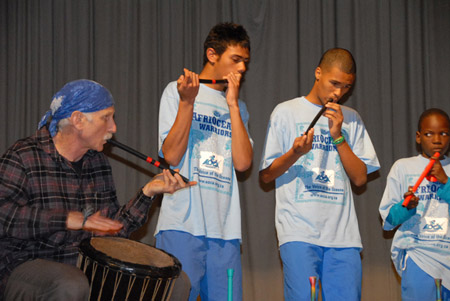 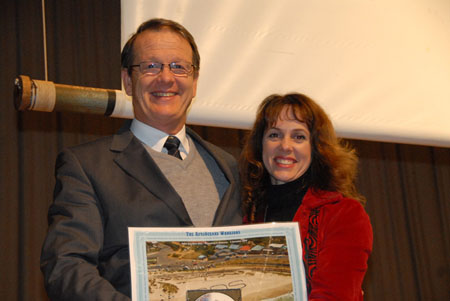 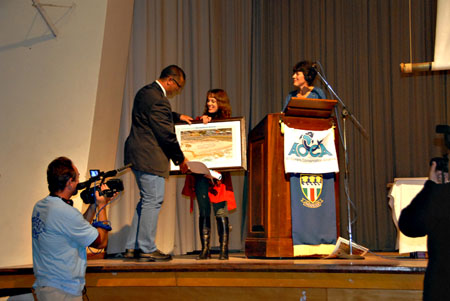 Mr Juan Benjamin receiving a gift, a large photo of the SOS symbol the learners made. 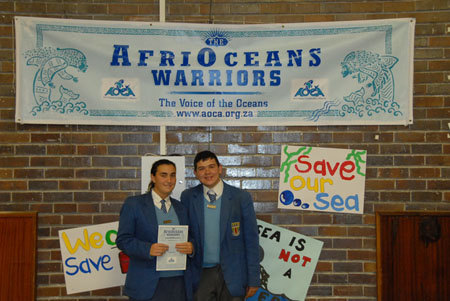 Learners from Muizenberg High School with the certificates against the backdrop of the wall in the hall decorated by the students.

A special thanks goes to ALL our AfriOceans Warriors that participated in the hike last December – we are proud of you!

And to everyone who helped us to make the event such a wonderful success, in particular Cape Point Vineyards who sponsored the lovely ‘Splattered Toad’ wine! THANK YOU!