Today I spoke to a delegate from Namibia, who told me that Namibia, as far as he knows has no shark finning problem at all, and that he loves shark fin soup, which he orders every time he goes to Mauritius, because it tastes so good. I went on to express both my bewilderment that Namibia has no shark finning issues since its neighbouring country, South Africa, is infested with it, and explaining that actually shark fins are cartilage, devoid of taste and the taste he is talking about has nothing to do with the fins and everything to do with stock etc. As though he never heard me, he preceded to confirm that it tastes really nice, and that Namibia has no problem with illegal catching and finning of sharks. As for Namibia’s position on the proposed 8 species of sharks, they still thinking about it I’m told. 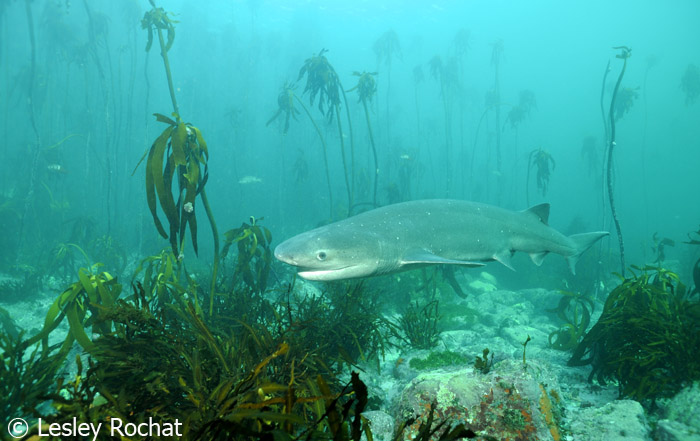 A beautiful seven gill shark, South Africa. Not a proposed species but also under threat by fishers.

I was warned that many of the delegates are clueless about the animals proposed and that the outcome of the proposals are largely in the hands of those lacking knowledge. Not that CITES can prevent animals from becoming extinct but certainly another opportunity to do all we can in trying, in particular in the case of CITES, regarding international trade of species. The rest is up to each country, right down to ground level. Therein lies the challenge, one which no country has succeeded in doing yet.

Equally perturbing was my interview with a former member of the CITES secretariat who told me that non profit organsiations create sensation out of animals like sharks with one aim, to raise money to continue their work (he didn’t know I was from a NPO). He enforced his viewpoint with all the hocus documentaries non profits produce to make a point, like WildAid, he said. According to him shark fin issues only came to the fore when WildAid produced a documentary insert about sharks being finned alive, which shocked people, and all the while the footage was fake. Now I know the footage he is talking about and I know it is not fake. At some point he talks about how all parts of sharks are used in catches by a particular country, even their bones (?). He digs his lack of knowledge grave further when he tells me sharks are only finned when they are dead, which he thinks isn’t so bad – a kind of ‘rather dead than alive’ approach. When I tell him that I have actually been on a longline boat and witnessed shark finning and that 90% of the sharks are alive when finned, he does what Mr Namibia did, he acts as though he never heard me and confirms that as far as he is concerned sharks are finned when dead. And his position on the proposed species of shark and tuna? Well, as far as he is concerned it’s not the business of CITES to be taking on fishery issues, but that of the Regional Fisheries Management Organisations (RFMO).

Tuna and sharks are on the menu this week…Tomorrow I have arranged a screening of Sharks in Deep Trouble, which has just won its 7th award at the Beneath the Waves Film Festival this week. It will part of the daily programme, which the 1500 attendees get. I have also given copies to members of the media, as well as a copy to all the delegates. We do what we can even though it feels like water off a ducks back when you speak to the likes of those I did today.