Posted Mar 18 2010 by Lesley Rochat in CITES, Conservation with 1 Comment

I’m sitting in the Committee 1, listening to the debate around the Atlantic blue fin tuna proposal which has been proposed by Monaco for listing on Appendix 1, which would mean no international trade in the species. So far more countries have indicated that they will not be supporting the proposal than those that will. It is not looking good. This despite the fact that the eastern stock of blue fin tuna has fallen to less than 15% of its long term potential. The majority insist that though they are aware that blue fin tuna stocks have declined considerably (to the point that even under a complete fishing ban the stock will continue to decline to record lows), they believe the management and conservation of the species is the responsibility of the RFMOs, i.e. the Regional Fisheries Management Organizations, in this case the International Commission for the Conservation of Atlantic Tunas (ICCAT), and not the business of CITES.

In addition, some countries are concerned about the impact the ban will have on poorer countries who depend on the fishery (short-term view – once the fish are gone there will be no fishery), while others add in how well they are managing their own stock (if they were it wouldn’t be in a crisis situation), and affirming why CITES should not get involved with a fishery related issue since ICCAT is doing such a great job (ignoring the fact that ICCAT has repeatedly failed to adopt science-based conservation measures for years and therefore largely responsible for the dire situation of the populations). After the results, Japan smiles to their victory, or disgrace?

The CITES comedy act of the afternoon has just taken off as Japan is blatantly ignoring all facts and has just said that there is no problem with tuna stocks, that there is no scientific evidence to indicate they are under threat of becoming extinct, that in fact stocks are very healthy, and that it shouldn’t even be considered for CITES Appendix I as it does not meet the criteria. They really are a joke given that the proposal is endorsed by ICCAT, FAO, IUCN AND TRAFFIC. It’s no wonder they put on their clown outfit, denying facts since they voraciously consume three-quarters of the global catch of bluefin while stuffing their faces with sushi and sashimi. Last night at an evening function they held they served blue fin tuna as if to confirm: ‘we eat blue fin tuna, now and forever’ till the last fish.

Spain and for the EU says they are “…deeply concerned about the poor conservation status of Atlantic blue fin tuna and acknowledge that fisheries for this species are driven by international trade. We therefore believe that the species qualifies for inclusion into Appendix 1.” Sounds good so far but then they add their BUT and propose an amendment to the proposal, which includes reviewing new scientific evidence, and deferring listing if it is required, but still this is better than a straight-out no. 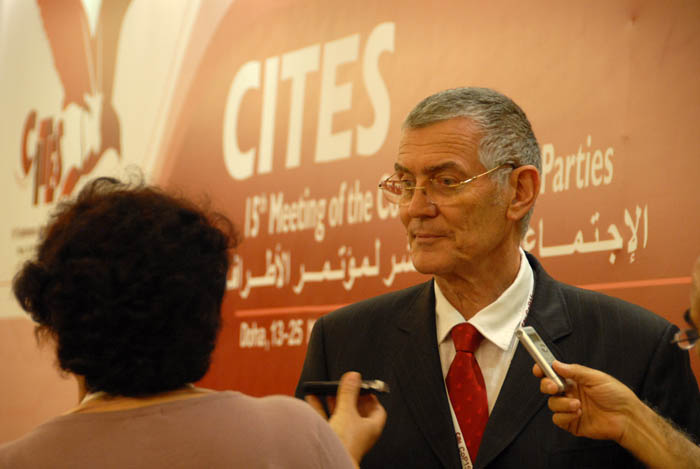 Patrick Van Klaveren ambassador of Monaco speaking to press after the results. Good for Monaco for the proposal.

Libya has taken the floor and appears to have been hired to support Japan’s previous comedy show and the act begins: Libya is directly insulting Monaco and their proposal, going as far as to accuse them of lying, of not having their facts correct, and of making a mockery of the CITES process with their proposal. His exaggerated gesticulations, the garbage that he spews, the mud slinging in Monaco’s direction has the entire committee room entertained and even the translator is trying not to laugh. I wonder why the Chair doesn’t turn his mic off, surely insults flung at other counties should not be allowed? Libya demands a vote. The debate has gone on for two hours now. Monaco requests an opportunity to ammend the proposal and not to vote. But his request comes in after Mr Libya’s, even though he said he had indicated his request to speak before Mr Libya, but that doesn’t matter now. The fate of blue fin tuna moves closer and so the vote is taken. Firstly for the EU amendment which is defeated and then the big vote, the do or die for tuna on CITES and as a species. It’s a silent vote so we won’t know who votes what, but it was a given, it is defeated and badly too: 20 votes for the proposal, 68 against and 30 abstentions. Japan must have paid well for the clown act, Mr Libya, and many of those votes. There is a round of applause – I turn to see who is clapping and spot short men with dark hair and Asian eyes.

I would be ashamed to be Japanese today, or Libyan –  today marks the day they had a chance to save a species but chose to drive it to extinction and fill their stomachs and greed till the last mouthful.