Rethinking the shark at TEDx Stellenbosch 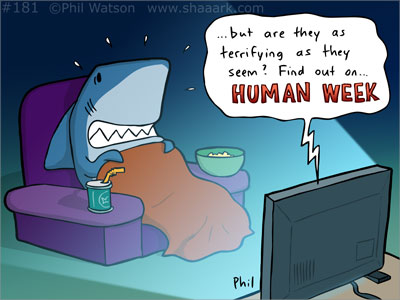 While Shark Week came and went, and highly talented cartoonist Phil Watson  http://www.shaaark.com/ shark cartoons, got me laughing again when he put Shark Week right into perspective with this so true cartoon (I’m a huge fan of Phil’s work!), I’ve had a crazy two weeks. I’ve gone through 2 computers: my main computer’s harddrive crashed, and then I spilt a glass of red wine right into the keyboard of my MacBook! And I burnt the kettle out while trying to make myself a cuppa tea to calm down! The good parts were the talk I gave last week with Clem Sunter, former Anglo American Chairman, and preparing for a talk I will be doing tomorrow at the first TED conference event in South Africa called TEDx, to be held in Stellenbosch.

The whole TED talks idea started in 1984 as a conference held in the USA with the aim of bringing together people from three worlds: technology, entertainment, and design but has since broadened its scope to include topics on science, business, the arts, and here’s where I come in, the global issues facing our world. Everything begins with an idea, ideas control the world but rarely are they tested openly. TED believes that for ideas to impact the world, develop into innovations, ripple through communities and spread between cities, we need to tell our stories. TED is thought of as a global community which welcomes people from every discipline and culture who have just two things in common: they seek a deeper understanding of the world, and they hope to turn that understanding into a better future for us all.

TED has now created a program called TEDx, a program of South African homegrown, self-organized events that bring people together to share a TED-like experience. The aim of this event, in particular after the World Cup, is to share exciting African concepts and export ideas rather than minerals and skilled workers. I am delighted to be one of 11 speakers who will each speak for 12 minutes, my topic, well you guessed, is about sharks, the title in support of my award winning campaign is ‘Rethink the shark’.  For those in and around Cape Town, why not join us tomorrow from 5pm at the Stellenbosch University. I hope to see you there, seats are going fast, entrance is free, so best you get on that email fast to find out more… http://www.tedxstellenbosch.org