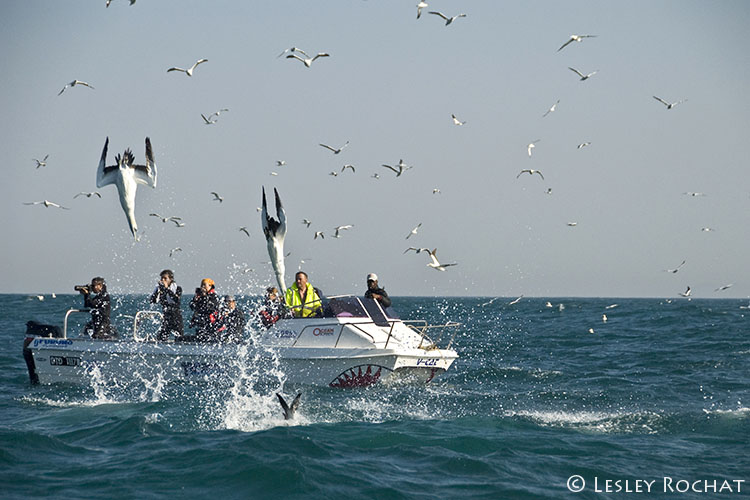 “Ok, on the count of 3: 1, 2, 3!!” shouts our skipper, Grant. We hit the surface, grab our cameras and prepare to descend as fast as possible. My heart is pounding; I’m nervous, anxious with anticipation. I’ve read a lot about the run and this is my first time in the middle of the feeding frenzy. The surface of the water is boiling with activity, everywhere common dolphins are breaking the surface, and then disappearing again, gannets are popping up from the depths while others are plunging at a phenomenal speed into the ocean like kamikaze pilots. I look overhead, it’s raining birds. 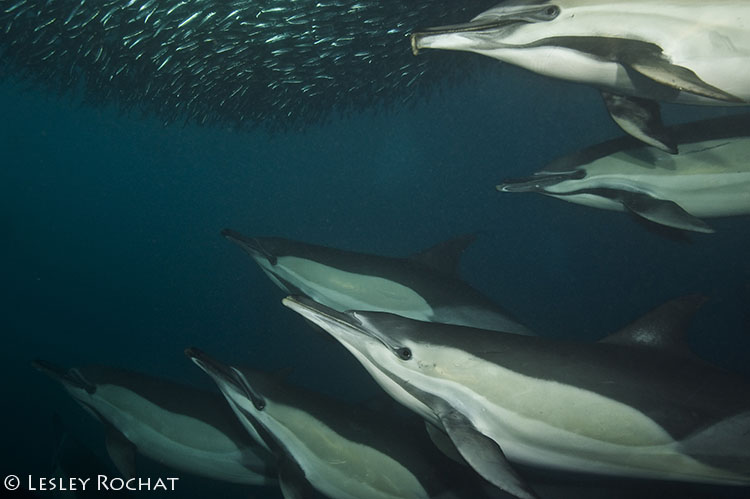 Beneath the surface the viz is poor, 4 metres max, which doesn’t help calm the adrenaline rushing through my heart. I follow the dive guide, Franseau Le Roux’s yellow fins to the small bait ball. It’s manic down here, the silence I’m familiar with underwater is filled with the high pitch sounds of the dolphins, and overhead countless explosions are going off, it’s the gannets breaking the surface, defying Nature as they fly through the water down to 8 metres to snatch up a sardine before heading back up again. Dolphins are speeding past me from all directions; they corral the sardines, driving them to the surface. I’m surrounded by predators who are ignoring each other, focused solely on the helpless little sardines that are instinctively glued to each other in a defensive baitball formation, which is shattered repeatedly by predators feeding on them. They sway and flow, forming and reforming, like visual music. I’m feeling somewhat like a sardine myself, vulnerable, especially when the sharks suddenly appear out of the poor viz, coming way too close for comfort causing me to squeal through my DV despite knowing they’ve only one thing on their minds, sardines! I fire a few shots but there’s just too much to take in for a first timer. I’m privileged to be part of one of Nature’s most magnificent phenomena, a dramatic underwater performance, the great dance of the sardine run.  And then all too soon the ball is gone and so have all the predators. Everything is quiet and still, as though it was all an illusion. 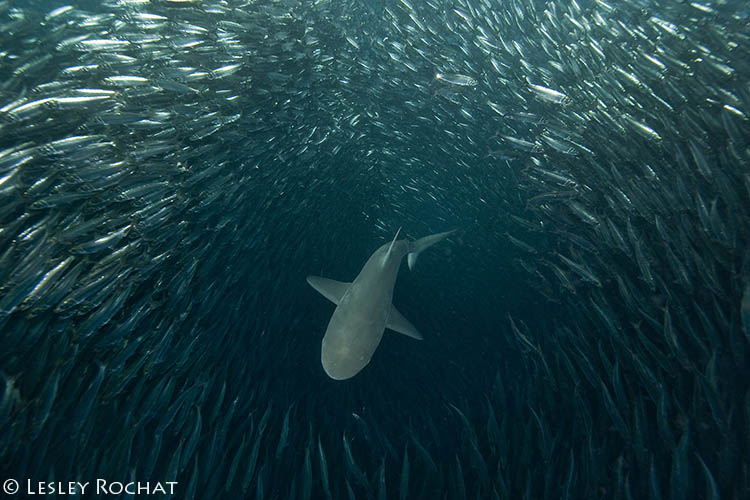 This was my introduction to the sardine run, and the squealing through my DV, which was heard by dive buddies, reason for my Shark Warrior nickname to be humorously questioned. But that brief experience was all I needed, I was hooked and wanting more of the same, much more. It was my third attempt of the sardine run. The previous two, spaced by 5 years, were totally uneventful due to timing and conditions – I never saw a single sardine. This third time lucky I had joined Walter Bernardis of African Watersports, who has been leading sardine run expeditions for over 10 years and definitely runs one of the most professional operations around. I also joined good friend and famous underwater photographer, Michael Aw, who has been diving the run for six years in a row with Walter. 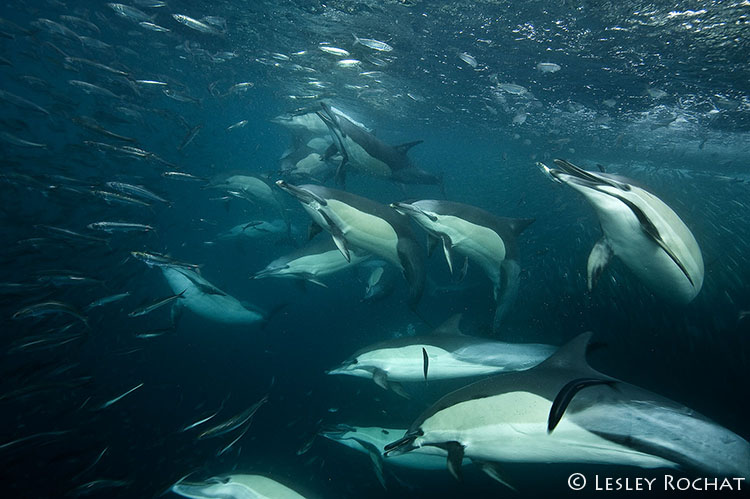 That the run is referred to as the Greatest Shoal and Show on Earth, rivaling the wildebeest migration, is for good reason, it is the greatest gathering of predators known. Over 20 000 common dolphins, 2000 bottlenose dolphins, thousands of sharks: bronze whaler sharks, dusky sharks, blacktip sharks, spinner sharks, zambezi sharks, even the odd raggie; various game fish, seals and birds such as the Cape gannet, cormorants, terns, including the Brydes whale who can swallow 10 000 fish in a single mouthful, all feast on the sardines. The run occurs during May to late July each year when a current of cold water heads north from the Agulhas Bank up to Mozambique, and still further east into the Indian Ocean bringing with it the sardines. 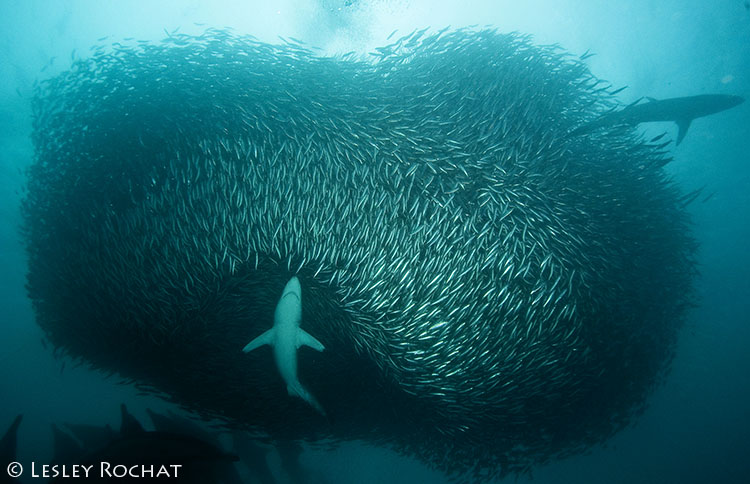 That small little bait ball I first experienced was my initiation for greater things to come which they certainly did with a 10m x 10m bait ball, which we hopped on early morning, and which was still going off till after sunset. Having sucked my air dry till literally the last breath, I was snorkeling and photographing at the surface when suddenly I heard someone yell “WHALE!!” I spun around to see a mammoth Brydes whale skimming past me, its tail propelling it, moving toward me: “This is tickets Lesley, you’re about to be whacked to oblivion by a whale’s tail!” were my thoughts as I continued to hold my trigger down, determined to go out in style with photos to prove it. The Sea Gods were with me and I live to tell the tale, fortunately not the whale tail version! And my photos? Well even with my lens set at 14mm the whale is so close, the shots reveal sections of its body and markings in detail. My only regret was that my boat took me back to shore early and I missed the opportunity to photograph the whale going through the bait ball repeatedly. Next time… 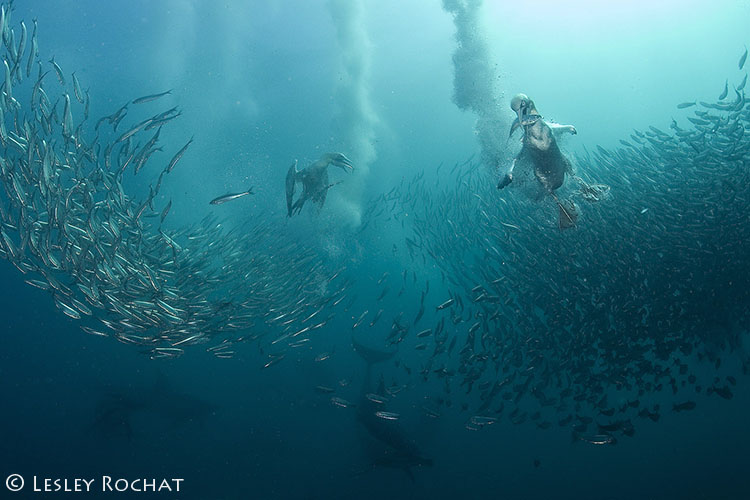 Photographically the run is a massive challenge in many respects and many of the awesome photos one sees have been a touch of luck and loads of skill and planning. Having gone with inferior strobes and arms which have since gone to the dustbin, and having no idea what to expect, I am happy with what I achieved, but hankering after the shots I missed, and the ones I never thought of focusing on at the time. But again, next time…(I will be sharing more of images next week in a slide show.)

Apart from Walters’s great sense of humor, invaluable sardine run experience, great boats, skippers, dive guides, and supporting microlight spotter, he runs his trips from the picturesque Mbotyi River Lodge, a beautiful lodge overlooking the river and bay, with great food even for vegetarians like myself.  Overall my two weeks spent on the run are filled with truly special places and moments, some a little hair-raising like when Walter and I were the last in the water on a very small ball consisting of a handful of fish, which had attracted little interest until the common dolphins arrived, along with some sharks. At that point the fish decided the best place to hide was right next to us, and though the sharks had no interest in us they had a great deal of interest in these little stragglers hanging around us. “It’s like having bits of biltong hanging off you while in a game park!” Walter exclaimed after we flew out the water to the safety of the boat, leaving the fish to their fate. Fond memories include the special moments with great people who travelled from all corners of the world to experience this magnificent spectacle, sharing stories, photos and videos in the Mbotyi pub, a good laugh and a feeling of being passionately alive. That’s what the sardine run does for one. 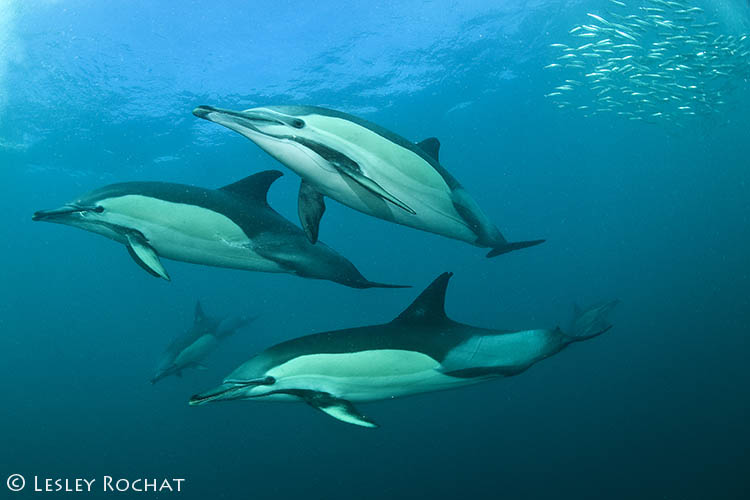 The sardine run is a must, but it’s not for the faint hearted nor the unfit – it’s hard work, early mornings, long days at sea on small boats, mostly rubber ducks, and in and out the water countless time. It’s also only for the experienced diver with a thirst for adventure, which it is sure to quench. As Franseau said: “ I measure my life in sardine run increments!” I relate and already planning my next trip in 2011. A big thanks to Mbotyi River Lodge and a very special thanks to Walter and Sandy Bernardis who I can’t thank enough for giving me one of the greatest gifts ever, the sardine run experience. To find out more about Walter’s trips go to African Watersports (the site is heading for a revamp soon) and book early as space is limited. Walter also does the tiger sharks and blacktips at Aliwal Shoal, which I have shared on my blog previously. Those
who would like to join me next year and share the boat I am on, email me directly at lrochat@iafrica.com