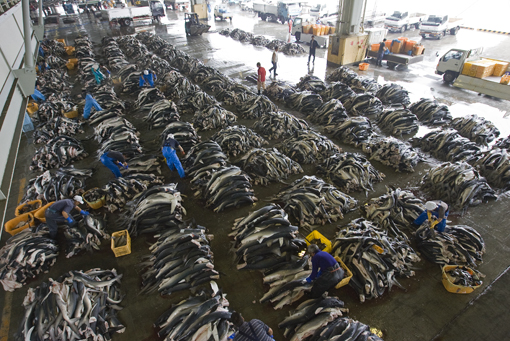 I know I promised to share some of my experiences and images of the sardine run but something demanding as much awareness as possible landed in my inbox this week, which I feel compelled to share with you. Before sharing this some important local news which is long overdue: last week the press revealed that Forestry and Fisheries Minister, Tina Joemat-Petterson, said she is subjecting Marine and Coastal Management (MCM) to a forensic investigation because it is “infested” with corruption. Scientists and conservationists, including AfriOceans Conservation Alliance, have for some time criticized MCM for failing to manage our fisheries. The transfer of MCM to the Forestry and Fishery department from the DEA has added to what appears to be a total breakdown of MCM. More about this later…

Back to the main topic of this blog and little background: about 5 years ago or so Alex Hofford came to see me when he was in South Africa to discuss a shark finning awareness project he was busy with. As two passionate shark conservationists, photographers, filmmakers and writers we had a lot in common and so became friends. Alex is a gifted and fearless photojournalist who now brings to public attention the shocking realities of the shark finning industry of Japan through powerful images, video footage and a hard hitting article:

“KESEN-NUMA CITY, JAPAN – It’s 5am on the the north eastern tip of Japan’s main island of Honshu, and 75 tons of dead shark is being meticulously arranged into a neat grid of tidy piles, of twenty sharks per pile. If you thought shark finning was exclusively a Chinese problem, think again. Welcome to Kesen-numa City, Japan’s shark fin capital. Here, six days a week, small teams of Japanese workers go about the hushed business of industrial shark-finning. 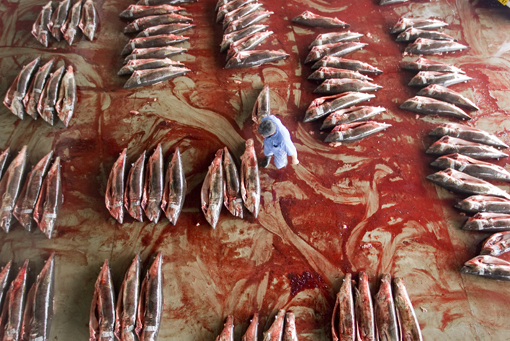 “By 6.30am, with piles arranged, the sharks are disemboweled first. Hearts are ripped efficiently from bodies by men wearing brightly coloured rubber boots and aprons. At 7am, shark corpses are cleaned of their blood by workers wielding water hoses. And by 8am, small teams are silently moving up and down aisles and rows like robots in a Japanese car factory, quickly slicing off every dorsal, pectoral and tail fin from the lifeless, grey lumps. Big hungry black crows squawk in the shadows, looking for bloody morsels. And shark fins plop with regularity into small yellow plastic baskets. The baskets fill up fast, are then weighed, and finally carried to a nearby truck, where a man with a notepad strikes a deal. At 9.30am, it’s all over for another day. Fork lift trucks scoop up tons of limbless carcasses, then dump them into a high-sided truck. The process is a brutal sight to behold, and not for the faint-hearted.”

Thank you Alex for bringing this to public attention! TO READ MORE AND SEE MORE IMAGES GO TO: http://www.alexhoffordphotography.com/node/2333