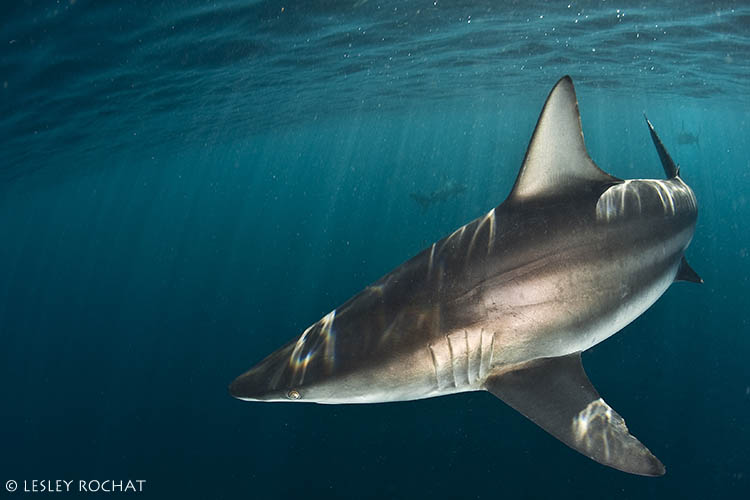 Blacktip sharks have no protection in South Africa and one of the species the anglers were aiming to catch. Divers from around the world come to the area to dive with these graceful sharks. Their value alive is worth far more than dead. They deserve protection. I received an urgent email on Monday from Roland Mauz of African Dive Adventures requesting my help. A group of anglers were organizing a shark killing event for the 2nd and 3rd October 2010 from Shelly Beach on the south coast of Durban, South Africa. The event, going as a fishing competition, was designed to ‘cull’ what the anglers believe is an overpopulation of sharks on Protea Banks, which they say keep taking their catch.

Reading the email I could have sworn I was suffering from deja vu; in 2007 a similar event was planned, also on the south coast, and AfriOceans was instrumental in helping towards stopping it. Representing AfriOceans, I ran a petition, which spread internationally and within 3 days over 4000 signatures, flooded my inbox. (See this link for the petition details )

I dropped everything and busied myself over the next 24 hours, communicating with various individuals, including one of the competition organizers, Stephanie. I notified Marine and Coastal Management’s (DAFF) Mike Meyer and Chris Wilke, who expressed disapproval of the event, and I drafted a new petition, the tone of which was no different to the 2007 petition. I was about to let the petition go to our data base of a number of thousand, but needed to check my facts one last time. Fortunately my second attempt to speak to Johan, another one of the organizers, was successful.

He confirmed the following: that they planned to use rod and reel, and would tag and release the sharks but would allow each participating boat to kill one shark over the two days of the competition –  so far over 50 boats had entered the competition – that they would target all species except raggies and tigers, mentioning bulls, blacktips, bronzies, and spinners as fair game, and that they would donate cash from the competition to the Cancer Association, and donate the dead sharks to charity organizations, ignoring the fact that the meat of large sharks is unfit for human consumption due to high mercury content.

I brought this to his attention as well as the fact that we as an organization were not happy for any sharks to be killed at all, that they could not take reducing numbers of sharks into their own hands, nor could they expect us to trust that they would in fact be tagging and releasing correctly when we had got wind of their ‘stab and release’ intentions.

I explained to him that though we appreciate their concerns, culling the sharks was not an acceptable solution, particularly given that it was not supported scientifically, that the very sharks they planned to kill were of high ecotourist value, and more importantly of immeasurable value to the ecosystems they supported. Removing them, albeit perceived as an immediate solution, would result in repercussions, which would only exacerbate the problem further. Above all, I explained that given the plummeting populations of sharks worldwide, if they went ahead it would not only result in a national but international outcry which would have severe ramifications for them and advised strongly that they reconsider their intentions. We ended the conversation with him promising to send me the details of the competition.

I was very pleased to receive an email back from Johan shortly after saying: “I’m just informing you that we are busy to call the shark compo off – after we talked it made me realise that it’s not worth targeting them and that we are busy this side to cancel the whole thing. I’ll keep you updated.”

This was a great relief and the efforts of many individuals, to name just a few, Roland Mauz, Grant Smith, Johan Boshoff, Trevor Krull, and Walter Bernardis, proved that united we can make a difference. I slept better that night.  But then this morning I received an email from Roland informing us that though Johan and Stephanie were amenable to reason, notwithstanding pressure from all fronts, and had pulled out of the competition, other fishermen, particularly private, recreational boat owners had indicated that although the competition was formally cancelled, they would continue the plan on a social basis. Their intentions: to kill as many sharks as they can without telling anyone.

Evidently we cannot let our guard down and if necessary I will join Roland to document on video and stills any evidence of unnecessary slaughter should these hardheaded, bigoted individuals proceed with ‘the plan’. Truth is, we are fully aware that clandestine killings of sharks are happening all the time, and that spiteful acts against sharks may occur as a result of this, but now we are much more alert, there are more of us, and our international and media support in this regard is immense. Let’s hope we will not need to call on it further. We appeal to those living in or near the area to please keep your ears to the ground and your eyes on any fishing boats, not only in the first week of October but at all times.