Posted Jun 19 2010 by Lesley Rochat in Conservation, Whales with 6 Comments 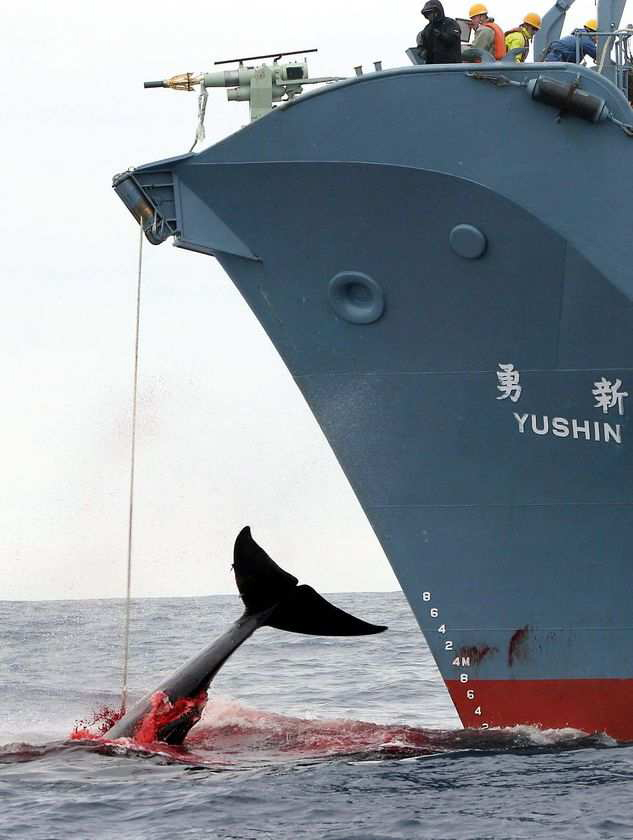 Harpoons hover midair as greedy whaling nations eagerly anticipate being given the green light to legally slaughter thousands of whales worldwide when this week the vote will be taken at the International Whaling Commission in Morocco to either lift the ban on commercial whaling for the first time since 1986, or not. Japan has aggressively been securing votes by whatever dubious means and last I read they were still short of the 75% required to overturn the ban. But you can be sure, just like the CITES I attended; they and their allies are working to change that as I write.

The war is on again, albeit it unevenly stacked in financial terms, and in the other camp petitions, pleas, and demonstrations have been running for weeks leading up to this convention, the power of the people being called upon to stop the ban from being lifted. The global public by large are vehemently against it. But will our voices be loud enough to suppress the greed of whaling nations intent on swelling their coffers further with the blood of one the most majestic and highly intelligent animals we share this planet with? Is it not murder? What punishment will they pay if they succeed, and along with the rest of our dying oceans our whales are eventually all gone too? Will they serve life imprisonment, electric chairs, or be harpooned to death as they should be? Dramatic, you might say, but if you appose my position you are in my opinion clearly either ignorant regarding the realities of how bad things really are, working for, or paid by  government, or industry, or some other bureaucratic institution, or someone holds the purse strings and thus either limits your ability of free-thinking, or you simply have none, and for sure you are not an activist or true lover of this planet and her bounty of beautiful creatures who each deserve a right to life no less than ours. I care less, move onto to another site if you don’t like it.

Having cleared that, note this, I am totally and absolutely against this ban being lifted, I do not agree with giving these nations a finger (legalizing limited quotas) so they eventually take the whole arm. I am for the loophole of the slaughter for ‘scientific’ purposes being amended, of no whales being murdered whatsoever. There are 6.7 billion cancer cells living on this planet called humans, and spreading, slowly killing their host and eventually themselves. We are losing species at alarming rates not known in history, environments we depend upon for our own survival are literally disintegrating; because of humanities wrong doing things are changing so fast that we can’t even see it, and things are going to get a lot worse. ‘Adaptation’ is the new buzz word in the spheres in the know.  It’s not like the people in power don’t know the scientific facts but they still play ostrich, ostrich and bury their heads further, resembling Richie, Ritchie with dollar signs reflected in their eyes.

Is the oil spill devastation, the CITES failure to protect species, the extinction list growing longer every day, the awful animal cruelty, the waste of resources dumped at sea, the famine, sick and homeless, the wars, the atrocities unspeakable, the collapse of societies and our environments, just to mention a few, not enough to realise the extreme folly of mankind? The leaders in the world today have the power to change things, but I do not hold my hopes on them being spiritually evolved enough to recognize the impact of their choices on the future wellbeing of humanity. I believe it is you, reading my blog, and me and everyone else out there who can change things, for our own sakes, for the sakes of our children, for the sake of the whales and their young, and all the beautiful animals so senselessly killed. We need to make wise choices every day in what we eat, what we buy, how we live our life.  We need to speak out, become eco-warriors.  And we need to stop just taking and taking, we need to give back, this is our duty toward a planet that so forgivingly and generously keeps nourishing us.  This is what I believe and live.

Say a prayer for the whales, will you…