What you wear & shark bites 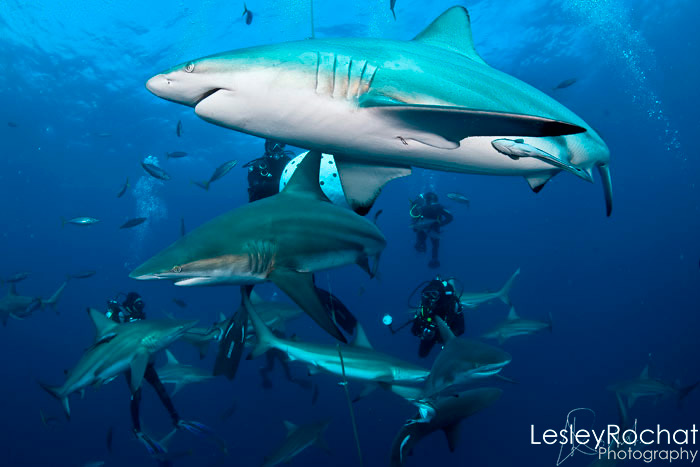 On Monday a young diver was bitten by a Dusky shark off the south coast of Durban, no doubt exactly where I was diving and took these photos of blacktip sharks two weeks ago. Though I received the press release below, I am still in the dark regarding the exact details of what happened and many questions remain such as whether there was potentially more than just the two-tone contrasting fins he wore that attracted the shark to him in particular.

But the point about wearing items that can attract a shark’s attention definitely deserves more attention: in my years of diving with sharks, and in particular what I have learnt from Walter Bernardis of African Watersports who is very firm in his belief about this, if you are going to dive with sharks then NEVER EVER wear contrasting items i.e. wear plain black fins, plain black everything, that includes white/bright logos and prints on wetsuits (I carry a permanent black marker to colour these out), which in a flash might look like a silver fish to a shark, and have a covering made for your housing if it’s shiny silver (like mine), and have no dangling items near your body. Last year on the sardine run I had a rather frightening experience when my dangling dive computer attached to my first stage via a hose and then onto my BCD by a thick string was snatched up by a shark who got caught on the string, frantically pulling at me, very close to me, until it managed to break it and swim off. Walter had warmed me and after that experience I now make sure that I am as colour neutral and compact as possible in the water while diving with sharks, in particular when they are excited by baiting or natural events like the sardine run. 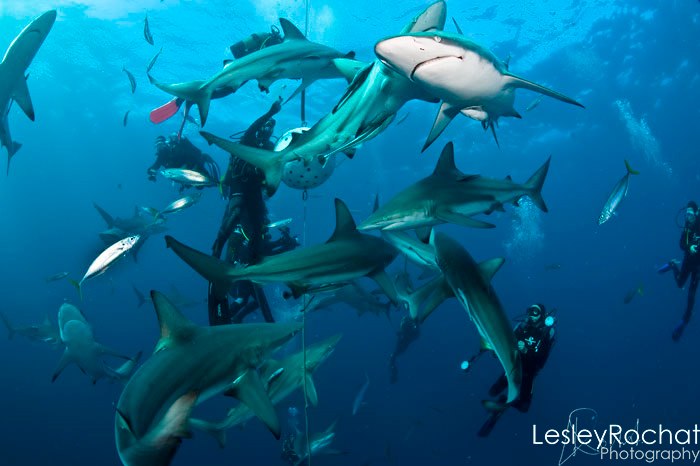 I highly recommend Walter as the choice for shark diving in Aliwal Shoal and the sardine run – he leads the way in this dress code, alerting his clients beforehand of what to wear to avoid looking like a tasty fish, with a can of spray paint handy for those who think it’s cods wallop, to spray on those spanking new two-tone fins just bought, and I have seen him use it!

As for colours attracting sharks, and the research done, including my own experience, sharks cannot see colour, what attracts them is contrast, hence the plain yellow wetsuit I wore in the Bahamas, from Coral Wetsuits, being of no interest to them, putting to rest the belief that sharks are attracted to yellow – I received no more interest from sharks in that plain yellow wetsuit than my plain black one.

If we want to play with top predators, we need to think like them, in particular in the way we dress.

The KZN South Coast diving community was devastated this morning (28 June) with the bite by a large Dusky shark on an Advanced SCUBA diver who was on a dive within the Aliwal Shoal Marine Protected Area (MPA). Although the injuries sustained by the diver were not fatal, the incident was nevertheless quite serious with the diver being evacuated by air. The diver is now in a stable condition following surgery at Albert Luthuli Hospital in Durban. Netcare911 Spokesperson Chris Botha commended the Blue Wilderness team for their exemplary handling of the situation, commenting that “this young man owes his life to the well trained Blue Wilderness staff who managed to stop the blood flow so quickly.” Ryan and Clare Daly (Blue Wilderness), Peter Bauer (rescue diver) and Alistair Louw (local skipper) were all on hand to assist with the medical care that saved the diver’s life, and all kept a cool head in a very stressful situation.

Speaking about the incident, Mark Addison of Blue Wilderness said that “after over 23 years in the diving industry, and 15 years in the shark diving industry, this has been the first time we have had an encounter such as this at Aliwal Shoal. Taking all that we have observed and learnt over the last two decades, there is no way that one could have known that that this individual animal would break all of the rules. However, the young diver is our main concern right now and our thoughts go out to him and his family during this difficult time.  Anyone who comes into our environment is considered to be a member of our family and we are very close to the diver and deeply saddened by today’s events.” The bite occurred when a large Dusky shark bit at the diver’s fins in what is most likely a case of mistaken identity. The SCUBA diver was wearing split fins with black and grey stripes, and to the shark this may have looked like a small shoal of fish.

According to Addison, “having swum with sharks on thousands of occasions, I can testify that isolated freak accidents such as this rarely occur. Although there are more large Dusky sharks around than usual at the moment due to the presence of sardines, there is no reason for them to have any more interest in us than they normally do, and this was really unfortunate”.  These large Dusky sharks generally live offshore, but come closer to shore during this time of the year as they follow the massive shoals of sardines that are making their way up the Eastern Cape and KwaZulu Natal coastlines. Dusky sharks are listed on the World Conservation Union (IUCN) Red List as “near threatened” and are one of the most vulnerable of the shark species to exploitation because it reproduces so slowly and at such a late age.