Posted May 24 2011 by Lesley Rochat in Great White Shark, Rethink the Shark, Shark Bites with 1 Comment 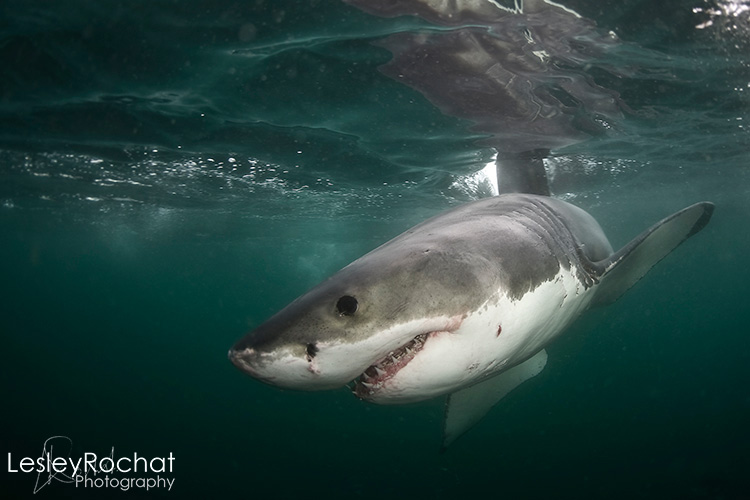 A stunning weekend was had by the famous shark scientist, Dr Leonard Compagno, and I when we visited Kleinbaai this past weekend as guests of Wilfred Chivell of Marine Dynamics, an outstanding white shark cage diving business run off a superb vessel, Slashfin.

I’ve been threatening to take up Wilfred’s offer for some time and tore myself away from the AfriOceans office when hearing that the weather was promising. I was looking for calm conditions, good visibility, more blue than green water, sunshine and loads of sharks. I got almost my entire wish list except for the sunshine and particles in the water which served as a great annoyance for that shot I am looking for and yet to get. The sharks were absolutely wonderful with up to five different individuals paying us lengthy visits. Their majestic beauty never ceases to take my breath away.

While we were there focusing on these magnificent animals tragedy struck further up our coast in KwaZulu Natal when spearfisherman, Warren Smart, died due to loss of blood after being bitten by a shark. According to press releases, Warren explained to his friends that the shark had not intended to bite him, but rather snatch the catch he was removing from his speargun and accidentally it bit his leg instead. I extend my condolences to Warren’s family.

Having dived with sharks for many years I know under certain circumstances, like not trying to feed them or handle them, diving with them is far safer than taking a sunset stroll alone on Noordhoek beach where I stand to be potentially attacked, raped and possibly killed – I would never ever take this risk, but diving with sharks is something I plan as often as possible. I also recognise that spearfishing remains one of the most high risk sports for unfortunate encounters with sharks. Like someone once said to me: “You wouldn’t go to the Kruger National Park and drag a dead, bloody carcass behind you, now would you?” Yet hundreds of spearfishermen do the equivalent annually, attracting sharks by their kills, and despite this very few have been killed by sharks. Though I respect each for his own, would I spearfish? Well no, firstly it goes against my spiritual beliefs which does not support killing animals and secondly, even if my beliefs were different, the risk in my calculation compares with that Kruger Park analogy, these are hungry predators after all. The risk, however, remains low and putting shark bites into perspective has always been one of my main objectives and hence the creation of our RETHINK THE SHARK PSAs, thanks to Saatchi & Saatchi.

A very big thanks to Wilfred/Marine Dynamics, to Hennie, the skipper and all the crew for being so helpful, I look forward to seeing you all again soon…

See more of my images of the white sharks here.