CATCHES ANYTHING, KILLS EVERYTHING! 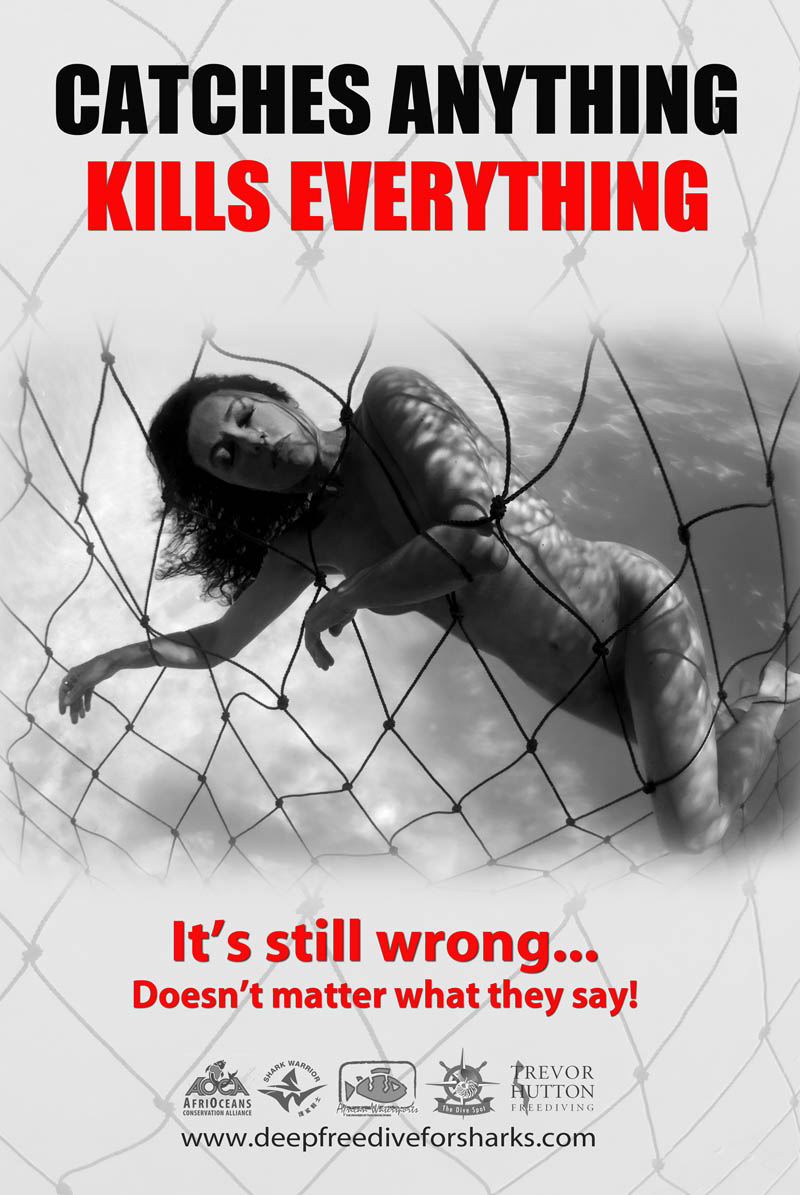 For too long the shark nets of KwaZulu Natal have been killing our sharks and other innocent marine life. They are no more than indiscriminate walls of death. The Kwa-Zulu Natal Sharks Board themselves, no more than a fishing company who catch and kill marine life with archaic gill nets (and drumlines), which are banned in other places of the world. In the last few weeks a number of our sharks have been killed and in memory of them, Cormac McCreesh of Durban has organized a ‘paddle out’ to the death trap nets of Scottburgh, which will be attended by all shark diving operators of the area, including Trevor Hutton and myself as part of our DEEP FREEDIVE FOR SHARKS campaign. Date:6 May at 6.30am from Umkomaas – join us and find out more here.

Unlike in Cape Town where AfriOceans presence is felt and my voice has a good platform, I have mostly felt powerless against the KZN Sharks Board issues so far removed geographically from me, leaving it to those on the ground to lobby against. I have however, continued to support where I can and it was the death of some tiger sharks in 2008 that initiated the AfriOceans WANTED! DEAD or ALIVE? Campaign, which is gathering momentum. It now represents a number of critical issues, the killing of sharks by the shark nets and drumlines, the continued targeting of white sharks along our coast, the illegal fishing and finning of sharks in our waters, and the general lack of compliance and protection of our shark populations by an inept government. It also aims for protection of a number of charismatic shark species such as the tiger shark, bull shark and cowshark. Find out more here and sign the petition.

I am often asked to help raise awareness about critical issues and welcomed the challenge to help two good friends Walter Bernardis and Johan Boshoff, who have been lobbying against the shark nets for years, and be part of an awareness campaign idea, which they had. The call to help came soon after a number of tiger sharks were killed in the nets late last year. With Trevor supporting me in November 2011 we headed for Durban and for an exciting, albeit unusual shoot ahead of us.

I have gone to all kinds of extreme lengths to raise awareness, but it was the first time I went totally naked, tying myself up in gill netting, to make a point as visually powerful as possible. I’ve no issues against nudity with an open minded background as a former actress and swimwear and underwear model – that part was the easiest, but tying myself up in the netting, holding my breath, and having to untie myself without panicking to resurface was the part I found the most challenging. In those moments I got a real sense of what those poor animals must feel like as they struggle, trapped and so frightened, and finally die. For our shoot though we tried different scenarios, naked as the day I was born, depicting vulnerability, just like those poor animals who are caught and drown every day, was best. I have proudly joined women who have through the ages gone naked to protest against numerous issues of concern. For example, we have revealed all in our fight against bull fighting, against war, against the fur trade, and now against the senseless slaughter of our sharks and other marine life in the Kwazulu-Natal shark nets.

My opinion of the nets and drumlines in summary: Yes, I’m aware of the death by sharks in years gone by in these waters, and of the inherent fear instilled in water-users as a result, and of course the reality that sharks do sometimes bite and kill people. But fear and loathing of sharks is what the existence of the nets thrive upon, while instilling understanding and appreciation of sharks is a threat to their continued use and therefore non-existent. I also appreciate that if nets in certain areas where there is high bather use were removed over night, and without proper by-in from the public, and someone were to be killed by a shark thereafter, it would be the same as cementing them in forever. Therefore so long as the city of Durban and its people support them, they will remain. Given that they have been in place and accepted by the public for decades, all the protesting many good-intention-people do will as a result forever fall on deaf ears. But we can, perhaps slower than we would like, and with our persistent passion, eke them out, in particular in the marine protected area (MPA) of the Aliwal Shoal, a place they should not be allowed in the first place. Standing together, however, is the only way. In addition, alternative solutions for areas in the MPA that do have high bather use need to be considered as real solutions to the senseless loss of too many innocent animals. And lastly, the Sharks Board’s daily public shows of dissecting sharks they have killed as entertainment and means of financial gain needs to stop. Any justification is unacceptable – similarly the South Africa fishery department justifies selling confiscated shark fins back to the triads to help raise funds they need for research etc. This is blood money and makes it wrong no matter which way you look at it.

I know it’s a lot more complicated, but for progress I suggest two things: we need to sit at the table with the municipality of the area and the KZN Sharks Board who need to be willing to hear us and find solutions with us – unless mass public pressure is secured, instead of what we presently have, a handful of passionate people, it seems the more pressure we put on them the more they skulk around, hiding their activities and the facts from us like the guilty they are. We also need a public education an awareness campaign that is supported by them. These might be small steps but in the right direction and I am willing to help the process.

I believe in education and awareness, without it you cannot win the support of people and they will forever remain ignorant, slaves to their beliefs, in particular when it comes to sharks, and without their support we cannot win this battle. With our new poster campaign and its timely release, I believe we have added just that much more to the move in raising the necessary education and awareness, the essence of change, that will help save our sharks and other marine life.

(Thank you to Walter, Johan and Trevor for their dedicated efforts in the making of this campaign – I love your passion for the ocean and working with you guys! – and to Basha for filming the ‘making of’, which I will share at a later stage.)

GO TO DEEP FREEDIVE FOR SHARKS TO FIND OUT MORE.